Though democracy is a relatively uncontested political form, he claims it leads to social conflict, runaway spending and a tyrannical government.

Karsten, founder of Mises Instituut Nederland and the Dutch Stichting MeerVrijheid (More Freedom Foundation), co-wrote the 102-page book with journalist Karel Beckman. The Intelligent Optimist spoke with Karsten about his ideas on democracy and political renewal.

People are increasingly critical of democracy these days. That must please you.

“The problem with these complaints is that people keep believing that democracy is the answer. They usually call for more participation rather than less democracy. They continue to believe that virtually all decisions must be democratic ones rather than left up to the individual, such as education and saving for retirement. People keep ascribing a major role to the centralized state. The morality and ethicality of majority coercion is never called into question.”

Are you advocating dictatorship?

“Dictatorship is not the only alternative to democracy. In any case, I am completely against it. Nor am I saying that democracy must be eradicated; when applied to a relatively small community, it can indeed work. I am simply calling for greater individual freedom, because I believe that each of us must be able to determine what he does with his life, so long as all individuals are protected from coercion and violence. For that matter, I think democracy is a kind of dictatorship, namely a dictatorship of the majority—more precisely, of the minority. Democratic policy is determined by a small elite, which sometimes decides against the wishes of the majority.”

In Beyond Democracy, Frank Karsten ventures to outline a political system based on freedom—which is entirely different from democracy, he says.

But what is wrong with democracy?

“Democracy is a form of collectivism. It’s a system in which the individual is subordinate to the collective, just as in fascism and communism. It’s the idea that we can or should decide literally everything together and that the result must then be accepted by everyone, even those who were against it. Democracy creates social tension, because the winners of elections are entitled to rule over the losers. As a result, democracy pits groups against one another.”

But democracy does lead to greater prosperity; the richest countries are democracies.

“Not so fast. Democracy is a system that leads to ever-larger public debt, because a limited term in office makes politicians behave like shortsighted tenants. They know the debts they incur will pass to their successors. As a result, we are now saddled with debts we can never repay. Democracy also leads to higher taxes, because voters use their votes to add their personal goals, such as increased funds for development aid, defense, orchestras or welfare, to the greater collective tab. It’s comparable to going out to dinner with a million people and deciding upfront to divide  the bill equally. Everyone has a strong incentive to order more than he normally would, which leads to an enormous bill. I conclude that democracy curbs growth and leads to waste rather than to prosperity.” 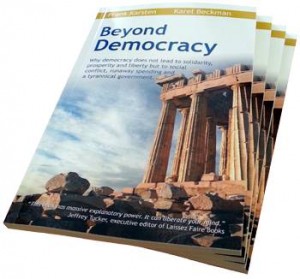 You favor individual freedom. But isn’t democracy synonymous with freedom?

“Democracy is the polar opposite of freedom. You aren’t free when the majority tells you how much income you must relinquish to the state, that you must serve in the military and possibly fight in some future war, which schools you may or must attend and what you will learn or unlearn there, what drugs you are allowed to use, whether you may end your own life and so on. These and many more choices are democratically imposed upon the individual. But freedom concerns that which is decided individually rather than collectively. The individual should be free to fully dispose of his life, his possessions and the fruits of his labor, so long as he does not commit violence, fraud or theft.”

But what about our solidarity? Collective taxation currently enables us to care for the weaker members of society.

[Laughs.] “That solidarity is forced solidarity—and that’s a contradiction in terms, because solidarity implies a voluntarism that is absent in our case. On the other hand, I believe that very many people are proponents of solidarity. They’ve voted for it, haven’t they? But the prosocial behavior that people want to express can in my opinion be expressed more effectively and satisfactorily in smaller units. That gives them greater influence over how their money is spent and makes it easier to filter out people who are cheating. Our collective system not only drives up expenditures, but also creates increasing numbers of both the vulnerable and scammers, because everything is put onto the collective bill. It’s not a good system.”

But will we truly take care of the disadvantaged once we give up our “forced solidarity”?

“If you say we can’t know the answer to that, you’re in fact acknowledging that democracy is a system that does not listen to the desires of its people but rather forces them to do something they don’t want to do—because if you release them from the obligation, they would no longer do it. But I doubt that. Most people want a social safety net and vote for it, so why would they suddenly decide against it if we dismantled the current welfare state? I can imagine a much better system that revolves around contracts. We don’t currently know where we stand, really, because the rules of our social security system are constantly being changed while the game is being played. That’s not exactly social, nor does it provide security. It seems to me fairer and more decent to be able to make clear contractual agreements that remain valid. If we are able to choose among several administrative units, then local authorities can never stray beyond the pale, because they can’t get away with it.”

Is that sense of responsibility the biggest advantage of the administrative freedom of choice you advocate?

“No, the major advantage is the presence of competition. Take Switzerland: an very decentralized democracy. In addition to 2,600 municipalities, Switzerland has 26 cantons, which enjoy significant autonomy and compete with one another in areas such as taxation and legislation. This kind of governmental diversity is healthy. That’s why I am in favor of the right to secede. Smaller political units that differ ensure that citizens and companies can vote with their feet, just as they do in the free market. That’s a much better way of exercising influence than voting with a pencil. Smaller groups restore our government to human proportions.” |

This interview was  published in The Intelligent Optimist in June 2013.