Recently I was interviewed by Bob Murphy from Lara-Murphy Report about Austrian economics, my libertarian optimism and the book Beyond Democracy.

Lara-Murphy Report: How did you discover Austrian economics?

Frank Karsten: Around 2002 I discovered Mises.org via libertarian sites like Lewrockwell.com. From there on things went quickly. I started reading many articles on Mises.org and their recommended books. It was like a revelation to me. Prior to that I couldn’t make much sense of so many things in society and suddenly there was this great free information source with arguments that were clearly presented, without obfuscating graphs, pretentious formulas, or voodoo logic. If I now listen to economists on TV I feel like I’m listening to astrologists.

“If I now listen to economists on TV I feel like I’m listening to astrologists.”

It all rang so true to me and it gave me a whole new perspective on so many economic subjects, like central banking, minimum wage laws, comparative advantage, the price system, etc. I was so enthusiastic I started bugging random – and totally uninterested – people with my newly found ideas. Many Austrian arguments are so obvious that I think most people would embrace them if it weren’t for their bias towards arguments from authority or arguments by consensus.

FK: This might sound a bit overblown but I think Mises.org is one of the most important sites in the world. The libertarian philosopher Michael Huemer once stated that irrationality is the greatest problem in the world because all other problems of humanity derive from it. Mises.org does important work to combat the daily irrationality we are fed through the mainstream media and our educational system. Around ten years back I registered mises.nl expecting I might want to do something with it in the future, and after meeting with enthusiastic Misesians I co-founded the Mises Institute Netherlands in 2013. 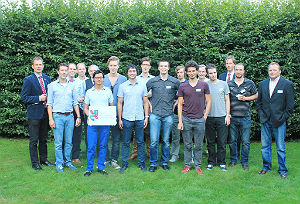 Our impact is growing but has been limited, also because our resources are. We organize conferences and courses in Austrian School economics, publish articles and assist in the promotion of books on this subject. A Dutch translation of a complete edition of Human Action is due to appear in the next few months.

“While the economic crisis continues and deepens people will increasingly look for answers in different directions, and one will be the Austrian School.”

We clearly cater to a growing audience. Just this week we received a heartwarming email by a disillusioned Dutch student who had quit his university economics study for he could no longer stand the Keynesian lies he was subjected to and was longing to meet like-minded people. We provide a refuge for people like him, since we are the main center of Austrian Economics in the Netherlands and people can meet up and team up. The number of people working with us to spread our ideas is steadily growing. Of course we are largely ignored by the mainstream media and academics, which was to be expected. But while the economic crisis continues and deepens people will increasingly look for answers in different directions, and one will be the Austrian School.

LMR: In a recent interview on the Tom Woods Show (link), you said that your libertarian views used to be a source of pessimism for you, but lately you have become an optimist. Can you explain?

FK: Although Western governments have been growing and have become more intrusive in many regards there are many positive long term trends and developments that I was unaware of. During the last 25 years more than 2 billion people have lifted themselves out of poverty, due to greater economic and personal freedom. That is enormous progress. Totalitarian ideologies like Nazism and communism have been on the way out.

“During the last 25 years more than 2 billion people have lifted themselves out of poverty, due to greater economic and personal freedom.”

Even in socialist Europe not everything has gotten worse. The military draft was abolished, air traffic and communication have been liberalized, euthanasia is increasingly legalized, gays can marry and entrepreneurship is more highly regarded than thirty years back. Mind you, I fully acknowledge many negative trends regarding liberty, like rising taxes, centralization and the enormous regulatory burden, but I think we often forget to count our blessings.

As libertarians we are still a small movement in absolute terms, but relatively our growth is impressive. By my conservative estimate our numbers have increased tenfold during the last decade. Ten years ago I would have to tell people I am a libertarian to which they generally responded with a glassy look. Nowadays I meet people who conclude I am a libertarian and sometimes confess they are too.

Technology is rapidly progressing and I think technology is generally a liberating force, empowering the individual more than the ruler. In the Netherlands it’s only 26 years back since we had our first commercial TV channel. It was highly contested and leftists predicted it would bring the end of civilization. Nowadays our public channels fear their increasing irrelevance due to the advent of YouTube, Torrents, and Netflix. Same with the mainstream newspapers, always toeing the government line faithfully, whose declining circulation numbers I witness with glee.

“In the Netherlands it’s only 26 years back since we had our first commercial TV channel. It was highly contested and leftists predicted it would bring the end of civilization.”

There are so many positive developments, I could go on for hours, but I admit it’s still a mixed bag. The human condition has improved enormously during the last century; we live longer, healthier, and more prosperous lives on a cleaner planet. Often these optimistic trends are reported by liberty minded people, like the doom-slaying economist Julian Simon. He posthumously inspired Bjorn Lomborg (a former Greenpeace member) to write the influential book The Skeptical Environmentalist, which helped a lot in boosting my optimism regarding the human condition. 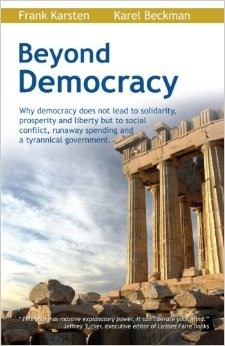 LMR: Your biggest project right now is “Beyond Democracy.” Can you explain what this is? Isn’t everybody for democracy?!

FK: Beyond Democracy is a concise and accessible book that I co-authored. It debunks thirteen democratic myths and explains why democracy is both immoral and does not deliver the promised goods. It is now available in 16 languages and I am glad to spread these contrarian ideas through public appearances, articles, and interviews.

Indeed, almost everyone is in favor of democracy; fifteen years ago I was too. I believed the mantra that the politicians, schools, and the media told us. Problem was I knew nothing about it really, like most people don’t. After reading the libertarian arguments against it (especially those in Democracy, The God That Failed by Hans Hoppe) I quickly changed my views.

Democracy is a collectivist ideology like communism and fascism. It is Socialism Light in which everything in society is regarded as a potential collectivist matter on which we could vote over. By centralizing decision-making it reduces the diversity of millions of individual choices to a few choices of bureaucrats and politicians. It leads to economic downturns, shortsightedness, social conflict, growing public debts, loss of liberty, and a government micromanaging our lives. In that light it is no wonder that during the last 50 years the economic growth in the western democracies has declined from 6.5% per year to below 1%.

“Democracy is a collectivist ideology like communism and fascism.”

The cracks in democracy are now beginning to show and we will hopefully see the rise of several counter movements. Beyond Democracy intends to clarify too why we need not look for a different politician, upright and well meaning, for democracy is inherently flawed, no matter who is at the helm.

LMR: Given your knowledge of Austrian economics and your skepticism of political “solutions,” what is your prediction about the euro-zone?

FK: I am quite hesitant to make predictions, especially alarmist ones accompanied by a time frame. Many libertarians have made rather apocalyptic predictions since 2008 and they have not materialized yet. False predictions undermine our credibility. The eurozone is clearly heading in the wrong direction. It has shown impressive growth but unfortunately in all the wrong indicators: regulation, the tax burden, and public debts. Between 2007 and 2013 government-debt-to-GDP rose from 66% to 93% in the Euro area, and this they call austerity.

But it is difficult to predict when the eurozone will hit the wall of reality; it has held out unexpectedly well since 2008 and Greece is still in it. One hundred years ago Mises predicted the Soviet Union would fall into poverty and tyranny and he was right. But it lasted 70 years anyhow. I hope the ill conceived European experiment will take a bit shorter to fall apart, but I won’t hold my breath.

Frank Karsten is founder of the More Freedom Foundation, a Dutch libertarian organization. In 2013 he co-founded Mises Institute Netherlands. In 2012 Karsten published his co-authored book Beyond Democracy . He lives in Amsterdam.